About Twilight at Monticello 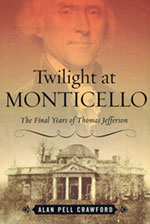 “Alan Pell Crawford’s beautifully written, evocative portrait of the ‘Sage of Monticello’ in his retirement years is a welcome addition to the Jefferson bookshelf. Juxtaposing affecting scenes of Jefferson’s domestic life with fresh and illuminating perspectives on his subject’s late-life political, philosophical, and spiritual preoccupations, Crawford’s fine book should engage and reward a wide audience.”
–Peter Onuf, Thomas Jefferson Professor of History, The University of Virginia

Based on new archival research and hitherto unexamined documents from special collections across the country, Twilight at Monticello: The Final Years of Thomas Jefferson, published by Random House in January 2008, offers a poignant and unforgettable look at Thomas Jefferson in the nearly 20 years of his life that followed his presidency.

Drawing on the correspondence of Jefferson’s children, grandchildren, distant relatives and Monticello neighbors, the book examines in vivid detail the struggles this iconic Founding Father faced in his retirement years—his chaotic and sometimes violent family life, his mounting personal debts, and his evolving yet contradictory views on race and slavery. It was during these years—from his return to Monticello in 1809 after two terms as president until his death in 1826—that Jefferson’s idealism would be most severely, and heartbreakingly, tested.

“Twilight at Monticello is Crawford’s best book and a humanizing corrective to the recent tide of Jefferson damning.”
–The American Conservative

“In Twilight at Monticello, Alan Pell Crawford treats his subject with grace and sympathetic understanding, and with keen penetration as well, showing the great man’s contradictions (and hypocrisies) for what they were. And he brings alive a milieu…Drawing on new archival sources, Mr. Crawford reconstructs daily life at Monticello and depicts a colorful supporting cast of eminent personages, family members and retainers.”
–The Wall Street Journal

“Broader in focus than its title suggests, Twilight at Monticello covers the entirety of Jefferson’s life and explores an abundance of subjects, including his stances on religion, slavery and federalism as well as Jefferson’s relationship with his slave Sally Hemings. It’s an intimate, well-researched look at Jefferson, and even readers with only a passing interest in our third president should find it fascinating.”
–The Richmond Times-Dispatch

“How this most remarkable man persevered, sometimes desperate enough to engage in dubious transactions, is the melancholy story historian Alan Pell Crawford tells with great subtlety and charm in Twilight at Monticello.”
–Bloomberg News

“[Twilight at Monticello] is so skillfully written and well-researched that the book held my interest until the final page.”
–Houston Chronicle

Buy Twilight at Monticello at Amazon.com